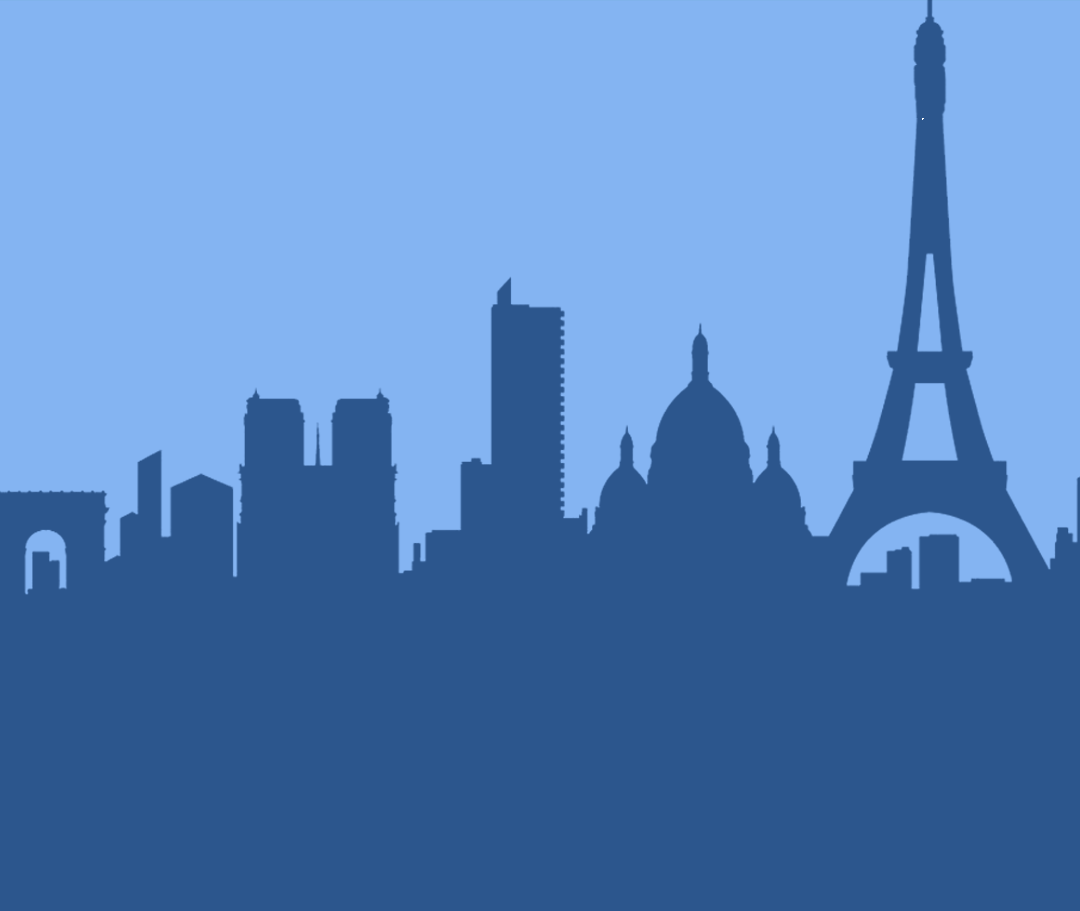 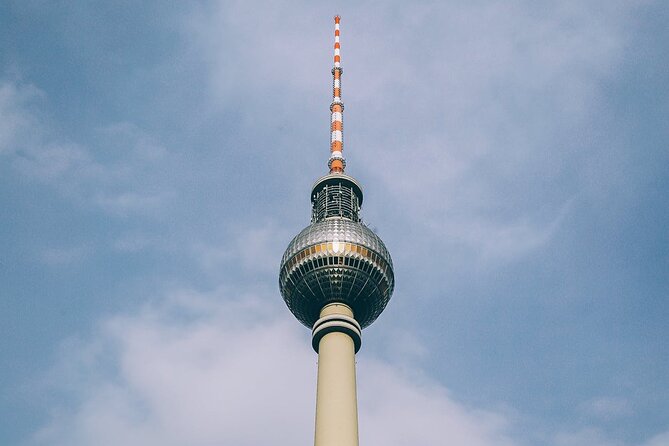 Berlin Wall Self Guided Walking Tour
Trace where the Berlin Wall once stood and learn how Berlin's place in the Iron Curtain defined the city for the second half of the 20th century. We’ll explore how Berlin has changed since the late 1940s, affecting the lives of those living both in the east and west.Join renowned historian Katie and culture vulture Colm as we explore both East and West Berlin, visiting Ackerstraße, Tunnel 57 and the Berlin Wall.This immersive audio tour is the ultimate guide to Berlin’s most vibrant neighbourhood, and can be downloaded anytime directly onto your smartphone.
Price from 6,08 EUR
Book now at Viator 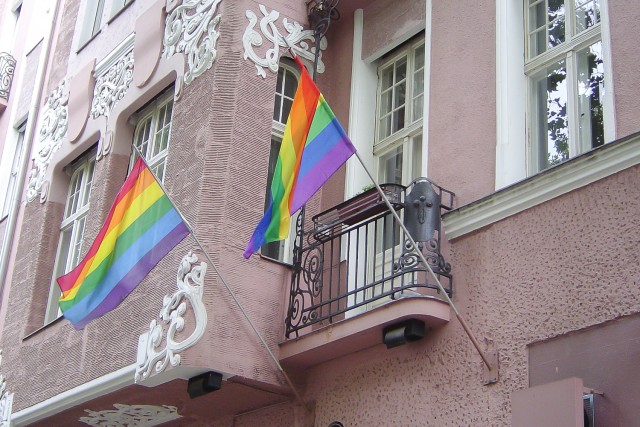 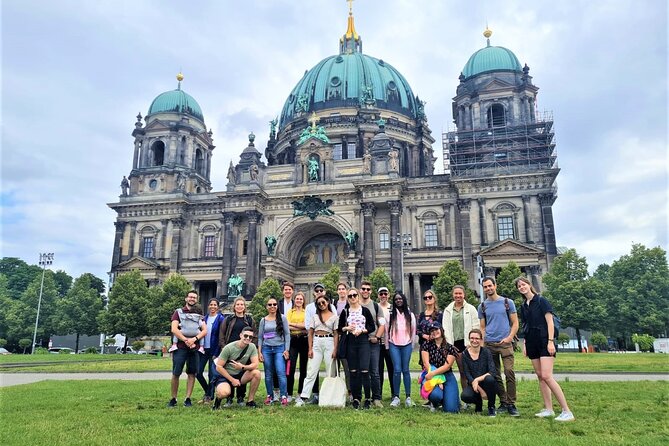 Original Free Berlin Walking Tour
The Original Free Berlin Tour is perfect for tourists, travelers, expats, and locals. This FREE Original Berlin Walking Tour is the perfect way to familiarize yourself with the German Capital. Learn about the great history of Berlin and yet still get the inside knowledge on a modern-day Berlin.This tour has been molded and sculpted by thousands of guest, and we’re happy to think we are the best in town! The Free Berlin Tour covers famous Berlin attractions, the most influential historical sights, and delves into stories of past wars, urban legends, and the city’s triumphs and tragedies. We love Berlin and are proud to call it home. We welcome you to this amazing place and would love to show you the sights!
Price from 3,00 EUR
Book now at Viator 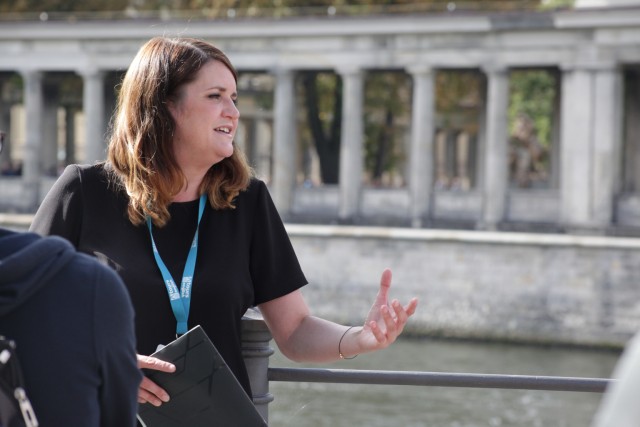 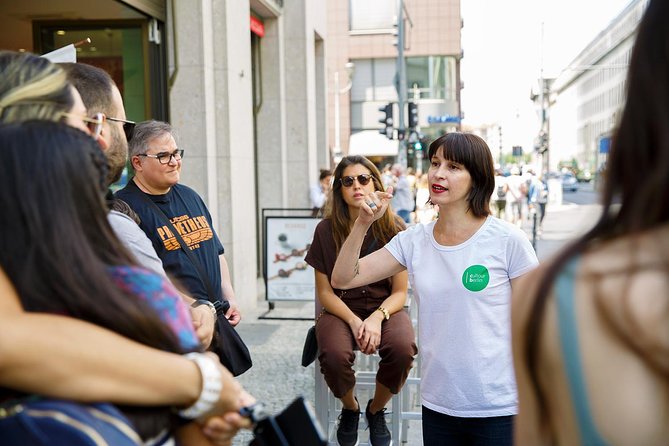 Berlin 4 hours walking tour in Spanish
Discover, in less than 4 hours, everything you should not miss of one of the most exciting metropolis in Europe.You start with the origins of Berlin at St. Nichola's quarter, you will see the Museum Island and the Berlin Cathedral. You will walk along the avenue of the kaisers, Unter den Linden, passing by the University of Humboldt, the Royal Library, the State Opera and one of the most beautiful squares in Berlin, the Gendarmenmarkt.You will know the details of Hitler's rise to power and you will see the remains of the Gestapo headquarters, as well as remembering the Jewish Holocaust with its memorial. You'll be told how the Berlin Wall was born, how it fell and how the Germans lived it, risking their lives to go West. You will admire the spectacular Potsdamer Platz and finish at the Brandenburg Gate, the symbol of Berlin.
Price from 16,00 EUR
Book now at Viator 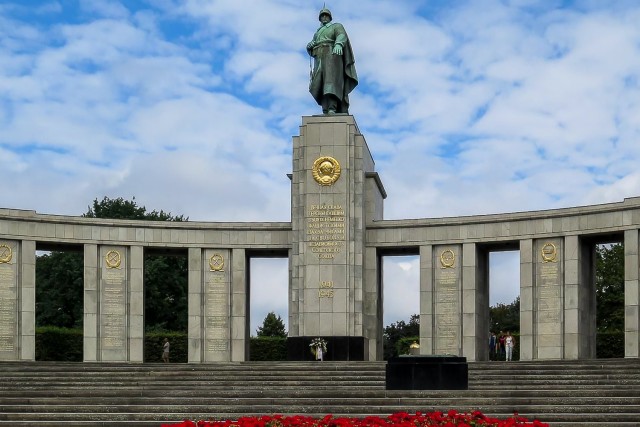 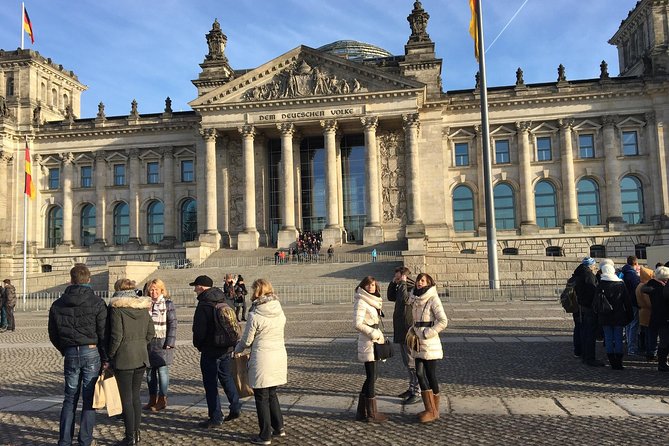 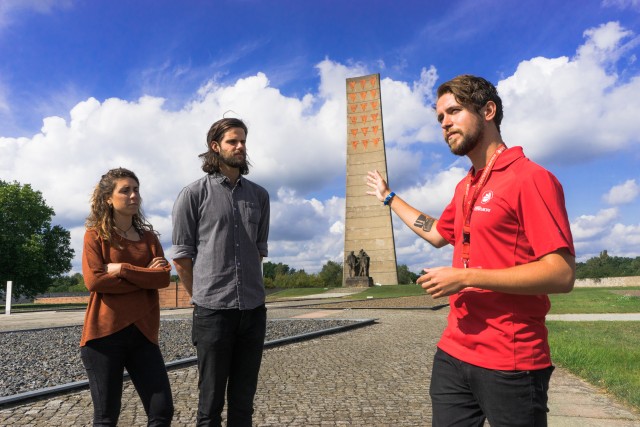 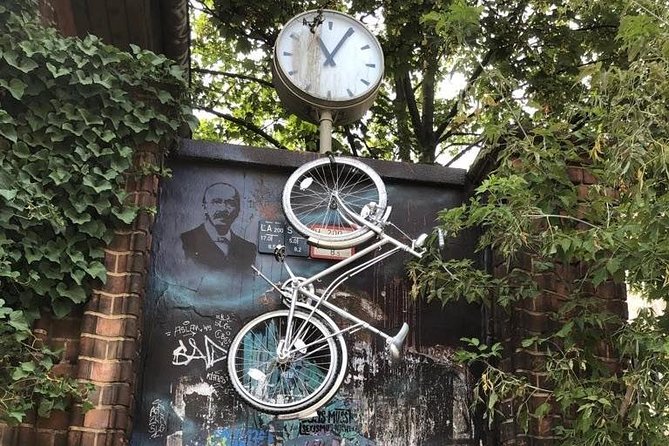 Berlin Off-the-Beaten-Path Walking Tour: Kreuzberg, Mitte and Friedrichshain
Learn about extraordinary people with extraordinary stories. Of art and architecture, cinema and squats. War and peace. East and West. A deeper look below the surface of Berlin.Shine a light into the shadows of history and why it effects the present on the Real Berlin experience. Visit districts that have changed beyond recognition over the decades, through processes as diverse as squatting, revolution and gentrification. Experience the never ending, ever changing chaos. We tell you the stories you don't know, of pioneers of cinema and those who refused to bow to fascism. We will make you fall in love.This small-group tour limited to 20 people makes for a more laid-back, intimate experience.
Price from 20,00 EUR
Book now at Viator 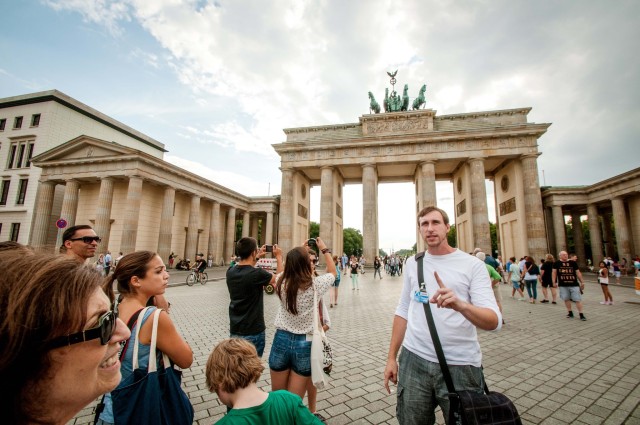 Discover Berlin Walking Tour
User rating ☆☆☆☆☆
Explore Berlin on a comprehensive walking tour, starting from our meeting point in central Berlin. See all the major sights, from the Brandenburg Gate to Museum Island, and hear stories of the city’s residents from enthusiastic guides.
Price from 18,00 EUR
Book now at GetYourGuide 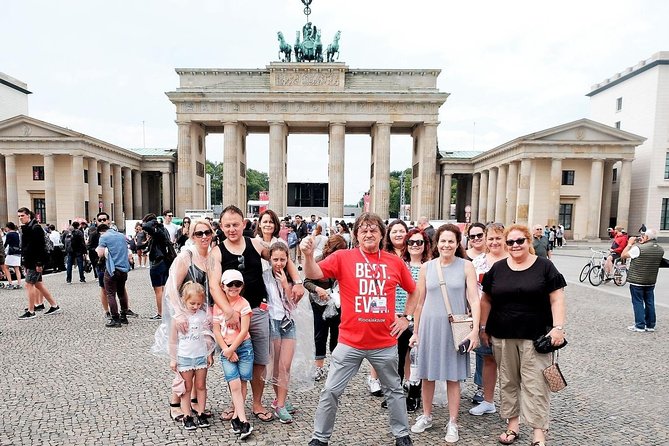 Storyline of Berlin Walking Tour by Lonely Planet Experiences
Experience the best travel stories for yourself! Join a local expert and uncover hidden gems on this Lonely Planet Experience powered by Urban Adventures. Berlin, known for its cultural landmarks and history, has evolved through the ages. Explore the political changes that have impacted the city, and discover how Berlin has reinvented itself to emerge as one of the hottest spots to visit in Europe. On our ultimate Berlin travel experience, you'll visit original sites of World War II and the Holocaust, visit remnants of the Berlin Wall, enjoy delicious samples from the oldest chocolate factory in the city and more. Your guide will be equipped with booklets of photos, maps and original documents, making this tour experience all the more memorable.
Price from 57,60 EUR
Book now at Viator 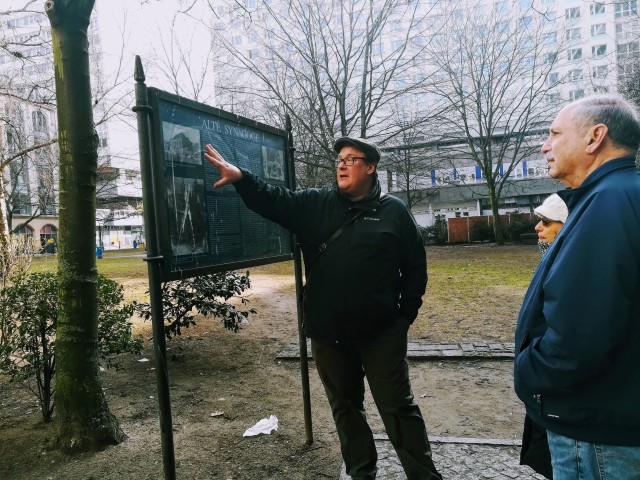 Berlin: Jewish History Walking Tour with Historian
User rating ☆☆☆☆☆
Explore Berlin’s 19th- and 20th-century Jewish history, the districts of Spandauer Vorstadt and Scheunenviertel in Berlin-Mitte and learn about rich cultural life and challenges of German Jews during the middle ages and Renaissance.
Price from 291,34 EUR
Book now at GetYourGuide

East Berlin Stories Small Group Walking Tour
Discover what the former East Berlin was really like on this unique experience; from cultural traditions and anarchic rebellions to dividing walls and creative fervour, this tour will take you behind the scenes of the real East Berlin.
Price from 74,36 EUR
Book now at Viator 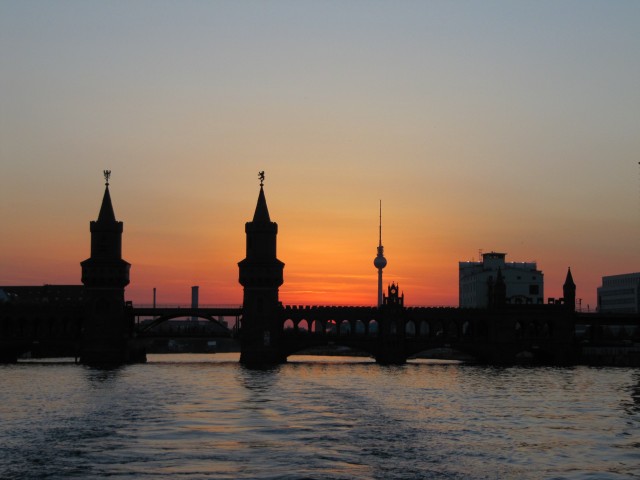 Berlin: Private Walking Tour with a Local
User rating ☆☆☆☆☆
Get a welcome to Berlin from a friendly and passionate local and discover the city like a resident. Learn the secrets about where to buy groceries, how to get around and much more.
Price from 35,00 EUR
Book now at GetYourGuide 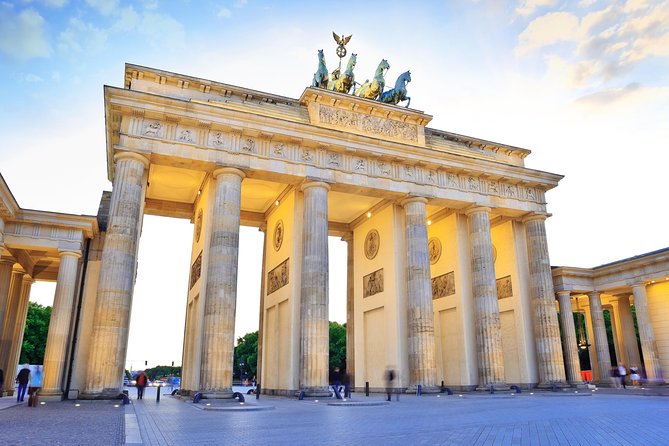 Private Half-Day Berlin Sightseeing Tour with a Minivan Including Short City Walks
On this comprehensive sightseeing tour you will see all highlights of the German capital. Enjoy a 4-hour tour with a local guide in a minivan with driver including stops and short walks at the main sites in former West and East Berlin.Experience the great boulevards of Berlin, like the Kurfürstendamm for shopping in the west and Unter den Linden with its historical buildings in the east. Discover the green capital of Germany in the Tiergarten park close to the modern Government District and the Reichstag parliament building. Explore the famous Brandenburg Gate and walk through the gate that was blocked for 28 years by the Berlin Wall. See remaining pieces of the Wall, take pictures at the famous Checkpoint Charlie and learn more about the Third Reich and the Cold War during a visit of original places.
Price from 245,00 EUR
Book now at Viator 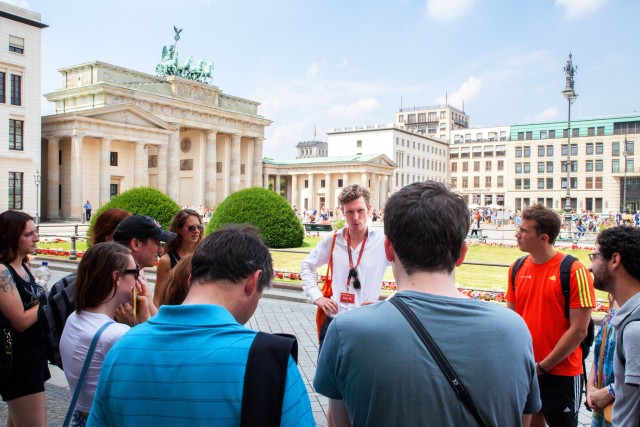 Third Reich Half-Day Walking Tour of Berlin
User rating ☆☆☆☆☆
Explore Berlin’s dark past on a tour of its former Nazi buildings, Soviet war memorials, and the site where Hitler’s bunker stood. Learn how Hitler rose to power and turned Berlin into part of the Nazi machine on this Third Reich half-day walking tour.
Price from 16,00 EUR
Book now at GetYourGuide 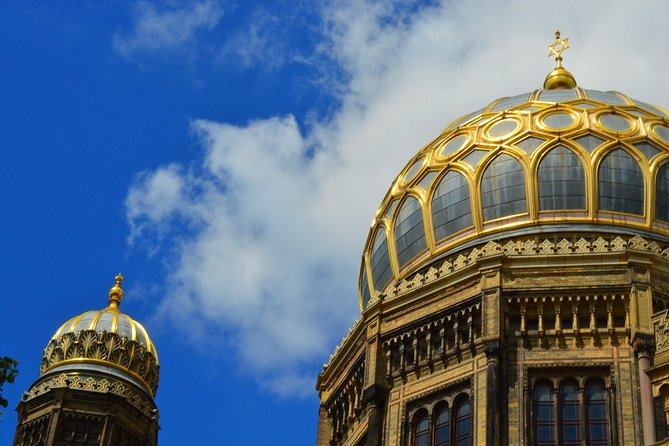 Jewish Heritage Walking Tour of Berlin
Chart the twisting fortunes of Berlin’s Jews through the ages on this 4-hour walking tour. With a knowledgeable guide, explore the Jewish quarter to learn about the city's Jewish communities from the 17th century on. View the Old Jewish Cemetery and New Synagogue, explore the Hackesche Höfe, once home to Jewish immigrants, and choose to visit other sites such as the Otto Weidt Museum, whose Jewish workers were protected in the dangerous days of the Third Reich. With numbers limited to 15 people, this small-group tour promises a more personalized experience.
Price from 19,00 EUR
Book now at Viator 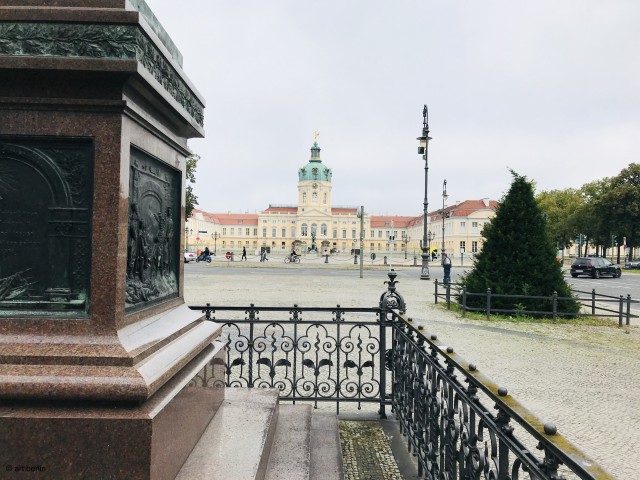 Berlin: Charlottenburg Sights and History Walking Tour
Discover the history of Berlin’s Charlottenburg on a guided walking tour through the city. Learn about its development from a village to the royal seat to today's center of the west of the city.
Price from 21,00 EUR
Book now at GetYourGuide 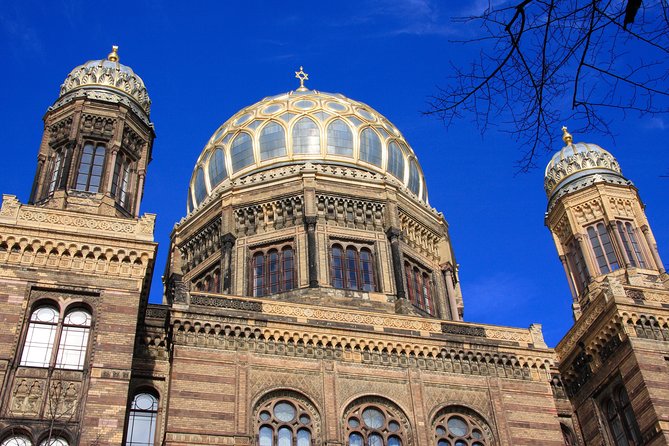 Private Tour: Jewish Heritage Walking Tour of Berlin
Trace the story of Berlin’s Jewish community on this private 4-hour walking tour. Accompanied by your own guide, head for Berlin’s Jewish quarter to discover the history of the city’s Jews from the 17th century to today. See the New Synagogue and Old Jewish Cemetery, and wander around Hackesche Höfe as you hear tales of the working class Jewish immigrants who lived here. Visit poignant World War II landmarks such as the Otto Weidt Museum, and see the station Platform 17 (Gleis 17) from where many Jews were deported.
Price from 175,00 EUR
Book now at Viator 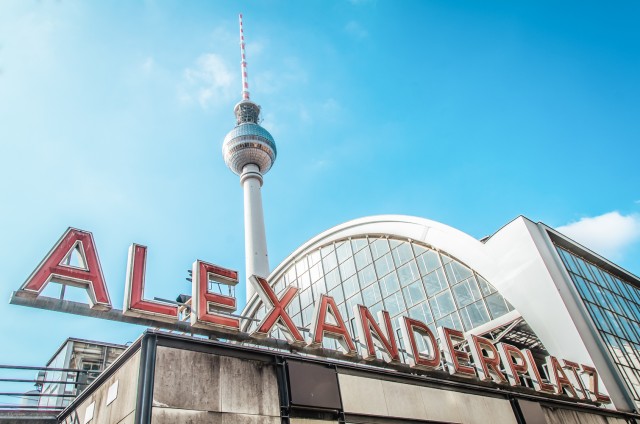 Berlin: City on a Budget Walking Tour with Local
User rating ☆☆☆☆☆
Book a local Berliner for a personalized tour. Get advice on where to go, what to see, and what to do from your private, personal, like-minded guide. With a friend who knows what you like the city will unveil its best to you.
Price from 60,01 EUR
Book now at GetYourGuide 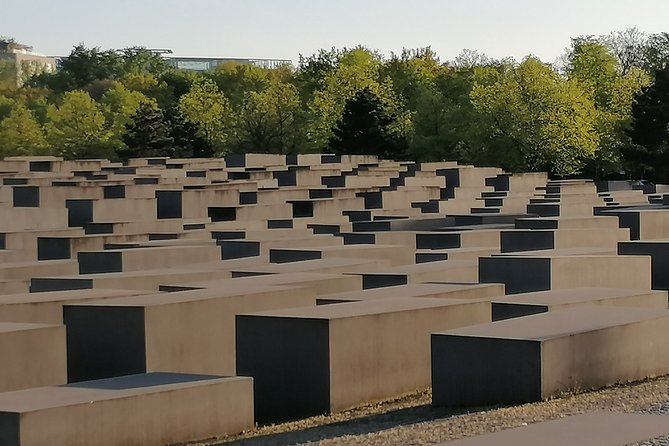 Private Half-Day Walking Tour from Berlin with Hotel Pickup
Explore the unforgettable city of Berlin with this half-day private walking tour. The tour gives you a great overview of all must-see places in the city center and offers an insight into the evolution of this fascinating German capital. Your guided walking tour includes a visit to: Reichstag (outside), Brandeburger Gate, Paris Square, Tiergarten, the Memorial to the Murdered Jews of Europe, the former site of Hitler's Bunker, the Berlin Wall, the former Jewish neighbourhood, the government quarter, Potsdamer Platz, the Topography of Terror, Checkpoint Charlie, Gendarmenmarkt, Bebel Platz, Unter den Linden and of course the UNESCO World Heritage Site Museum Island.This guided walking tour can also be adapted to your interests and wishes.
Price from 378,38 EUR
Book now at Viator 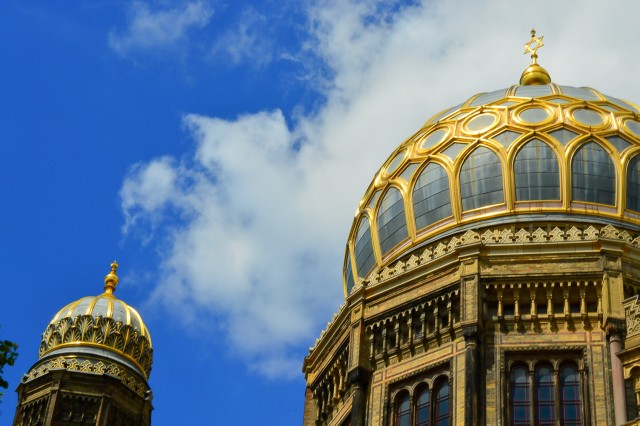 Berlin: Jewish History Walking Tour
User rating ☆☆☆☆☆
Discover the history of Berlin's Jewish community, from the Enlightenment to the horrors of the Holocaust. From the ancient Jewish-Cemetry to the New Synagogue, learn how Jews prospered, perished, and rose again to thrive in Germany's capital.
Price from 19,00 EUR
Book now at GetYourGuide 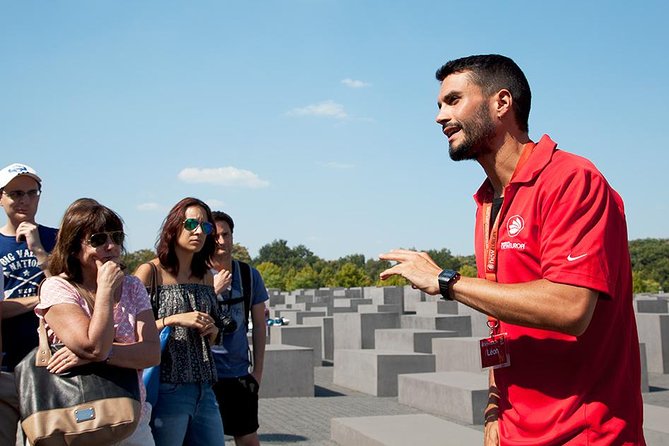 Berlin Third Reich Half-Day Walkingtour
Join your guide in an intimate examination of Hitler’s rise to power and the subsequent twelve years of Nazi Terror. During your walking tour you will also utilize public transportation between the sites. Explore Berlin’s final World War II battlefield and uncover the profound scars still found in the city today. Highlights of the tour include the Former SS and Gestapo headquarters, Propaganda Ministry, site of Hitler’s Chancellery & bunkers, memorials to the victims of the regime, Berlin’s Jewish quarter, the New Synagogue & Kristallnacht.
Price from 16,00 EUR
Book now at Viator 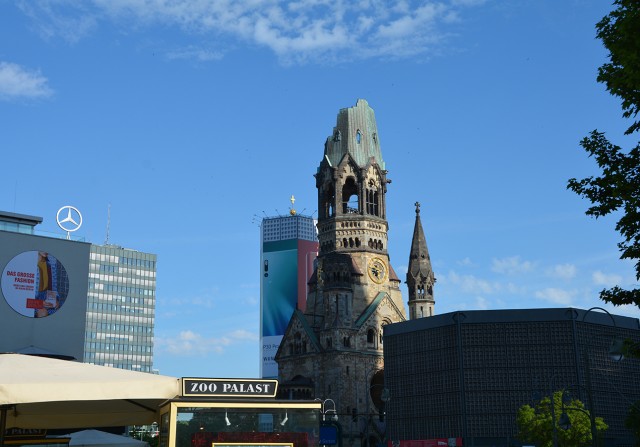 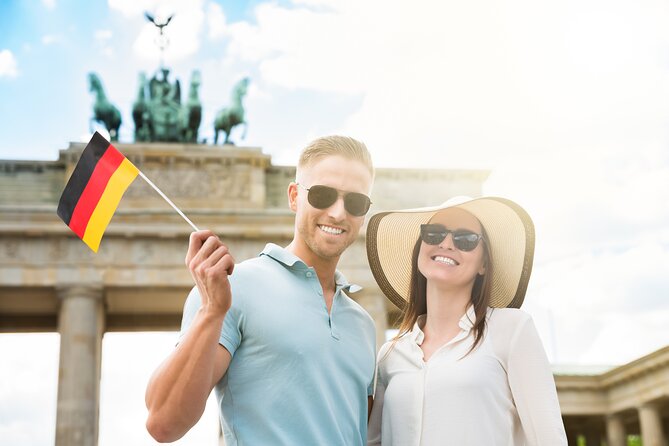 Private Custom Walking Tour of East And West Berlin Including Double-Decker Ride
Enjoy an unforgettable day in Berlin. Come close to all the main attractions on this 6-hours private tour. We are mainly walking but also use public transportation to get from one area of interest to the other. The tour can be customized to your interests. Your guide will take you to the Western city center with its shopping boulevard Kurfürstendamm and the ruin of the Memorial Church. You will visit the Government district with the famous Reichstag Building. You will walk through the Brandenburg Gate, symbol for the German division and reunification. And not far away you will find traces of the Third Reich and the Cold War. We will also visit the old historical Berlin with the Museum Island. And you will take a ride one of the popular double-decker buses through the large Tiergarten park area-
Price from 195,00 EUR
Book now at Viator
12345678